Replacing the crappola metal railing with a so much prettier, sturdier and better looking wooden railing really got us into the mood to continue loving on our porch for a little longer.

You see, when we bought the Ugly Duckling, not only did it have the ugly metal railing, it also had an equally rusty hand rail right - Smack-dab! - down the center of our stairs. Along with the equally ugly metal awnings above our windows, it was one of the first things to go.

Gone but not forgotten.

Unfortunately removing the handrail left behind a crater where the rusted bolts along with the movement from a half-loosened railing had broken out part of the concrete of the porch. Meh! It looked like a gnarly monster had taken a bite out of our porch's front edge. Fair warning, those pictures aren't pretty and they don't really improve much at the end of this little project. Flaky paint never makes anything look pretty, and the paint job on our porch is definitely failing or rather, rubbing off and revealing a red underlayer. We have plans to powerwash, sand and re-paint, once we're completely sure which colors to paint our house. 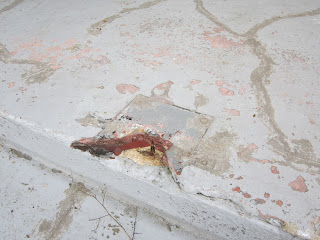 Anyways, back to the problem on hand: chewed off edges on our concrete porch.

Luckily, HGTV came to the rescue. Ever since buying the house and embarking on DIY project after DIY project and learning that, no, a lot of things take waaaay longer than a weekend (because you don't have a 30-man crew as a back-up), my relationship with HGTV has been a bit strained. This has led to a severe reduction in HGTV consumption on my part but fortunately I tuned in on one of those Home and Patio show episodes where they introduced Quikrete's repair mortar in a ready-to mix pouch. "Add water, knead, apply, done!" sounded just like what I needed, especially the repeated confirmation that it would indeed stick to and bond with existing concrete. 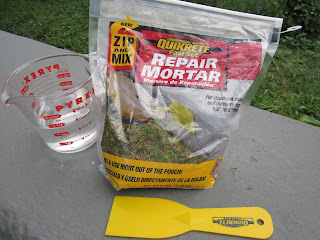 [It's in the bag ... including the yellow spackle spatula]

During my next trip to the blue box I spied those bags tucked away in the corner with all of the other concrete mixes and fixes and decided to take the chance. At just about $5 for the bag it was a very inexpensive little adventure.

Following the instructions on the bag I cleaned the gnarly edge and removed all loose bits. Then I measured and added the water to the mix, released the air and gave it a thorough kneading. Then it was on to spackling!

Call me weird but I enjoy spackling (and mudding), getting it all nice and even. I applied the concrete mix in layers, making sure to press the first layer firmly against the old concrete to ensure a good bond, and then building it up to form the step's edge. The instructions said that the mix would remain workable for 20 minutes, and that's exactly what it did. 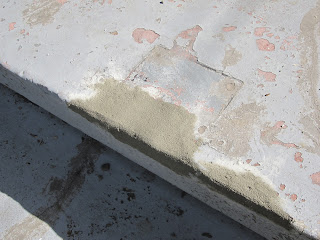 Like I said, not all that much prettier but at least the crater is gone and the step doesn't look like a half-eaten cookie anymore. Thank God for small blessings.

It has now dried and is actually rock-solid. We were skeptical about how well it would bond to the old concrete but it did and it's not going anywhere. Even the color has changed enough to blend in better with the existing grey so I'll be able to hold off on painting the porch for a bit longer.  Those $5 were well spent, if you ask me ;o)