I know I promised posting would pick up at our Little Old House and here we are, a scant 4 weeks later and what has happened?
Nothing.
Not one bit.

You see, over the summer Little Man turned into a raving mad Baseball nut. After a grand time at Baseball camp he just HAD to join Little League for more Baseball goodness. Sure, I said. It'll be fun, I said, especially when the husband found a team that would have practice on days that a) did not interfere with Karate lessons and b) was scheduled for night where the husband could drive Little Man.

I kind of like Baseball. I'm not crazy about it but it's such an American experience for me, the little German ex-pat, that endears the whole sport to me. I still don't get the finer details of the game and oftentimes find myself yearning for a bit more ...ahem, action on the field but overall, I'm okay with Baseball. 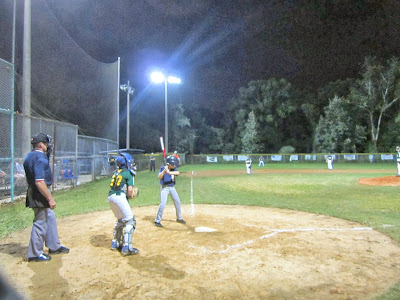 Well, until we started Little League.

First the practice days were changed. They now conflict with Karate so that's on hold right now and they happen to be on nights where - fun, fun - the husband cannot drive Little Man.

I've been sentenced to 1.5hrs of time-out on the bleachers twice a week plus a whopping one hour round trip between field and home because somebody ran a ship into the bridge we usually use. Unless there is a game which means I'm stuck on the bleachers even longer while slowly building up rage that games go until 9pm on a school night.

Anyways, it's been eating into what little time I have during the week to get things done aside from the usual, regular maintenance type of activities, some of which have to wait until the weekends now, which means there is less time for DIY projects on those two days as well.

It's a vicious cycle, I'm telling you, and I'm not happy.
Meh.
Good thing it's the shorter fall season.
I'd give Dexter a run for his money if it lasted any longer ...