Coming out of the closet

As sure as rain we wanted a "dressing room" as part of our Master Suite, especially given the amount of space we had to play with once the upstairs kitchen was gone. Just ...what makes a dressing room a dressing room? And why not just a closet? And ...? "Dressing room" is a pretty highfalutin concept, and the husband and I are nothing but pretty simple and down-to-earth-ish. So what are we going to do?

Well, we call it a "dressing room" but look at it more like a walk-through closet. That brings it down a notch and made planning for it a little easier. We were especially inspired by Ana White's closet system 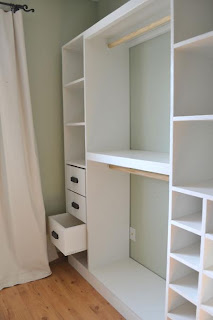 Neat, hm? Some shelving, some rods for hanging, the option to create shoe cubbies and drawers - pretty much perfect for what we had in mind and not impossible to build ourselves.

Off we went to the home improvement store - coupon in hand - and shopped 'till we dropped. Little Man's legs got really tired so he hitched a ride 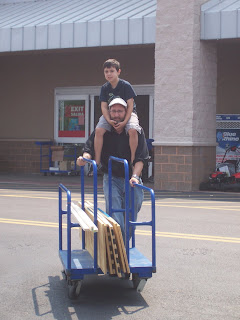 First step was to prepare the plywood that we'd cut to our specifications at the store: husband and little man sanded it nice and smooth and primed it while I mudded, sanded and primed upstairs. 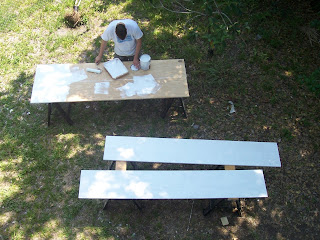 Rather than build two towers or stick with the originally suggested size on the Ana-White.com page, we decided to minimize the amount of headache the sloped ceiling could give us by creating true built-ins. We screwed two brackets each into both floor and ceiling, measured each corner point from floor to ceiling and cut the boards that would form the sides of our shelf to exact size. 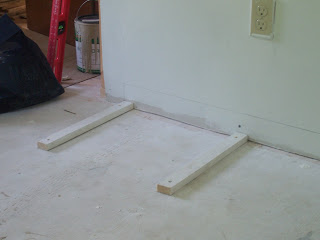 At first, dear husband wasn't convinced my method would work, but work it did and the sides slid in perfectly. A couple of countersunk screws later and we had the first shell of a shelf! 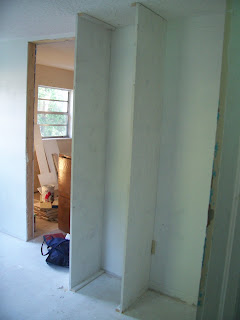 It's nice and stable and straight! The rods for hanging clothes will extend from one side of the shelf to the wall on two different levels, high and medium, to maximize the space. Of course, there's still plenty of work left to do before we can move our clothes into the space but we're one step closer!