Remember when I mentioned earlier that we're still kind of in the rough construction phase of things rather than the decorating stage? Well, that's still mostly true except for when it comes to lighting where function and decorating just simply go hand in hand.

In order to pass the safety inspection and get the electricity turned back on at the Duckling, all of our lights had to have basic covers (no exposed lightbulbs and/or wires) so our electrician went ahead and got simple cheap glass globe fixtures. 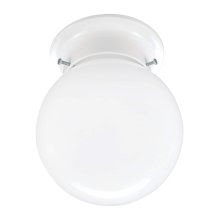 [source]
Function - check. Design - Yeaaah, not so much. At least the bulbs were covered, we passed inspection and life (and lights) went on.

Inspired by a blog trend of adding lamp shades to regular ceiling fixtures, I took off the glass globe and popped on the shade of a smaller lamp I had kicking around shortly after moving in. 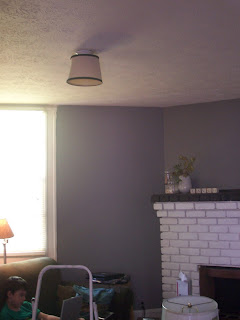 [Step 1]
Ever seen a more forlornly looking lamp?
No?
Me neither.
It did, however, look better than the glass globe, even if the scale was entirely off. 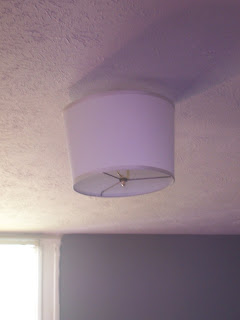 [Step 2]
After a quick run to the store about a week and $15 later, things started to look up. Just when we thought that we were done tweaking lights we realized we sorely missed on little feature.

We used to have them in every room over at Silver St and enjoyed how much cooler our place felt thanks to a little air movement during those sweltering Florida spring, summer and fall days, even if the ac wasn't running. Many seem to consider ceiling fans a design faux-pas but here in Florida, they're really more of a bare necessity - well, at least to us. So sue us - we did install a ceiling fan and then plopped the shade on top. 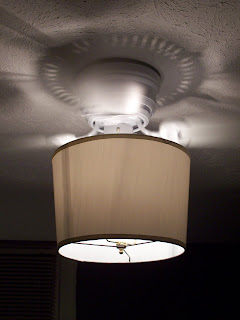 Much much better. Everybody breathe a collective sigh of relief :o) 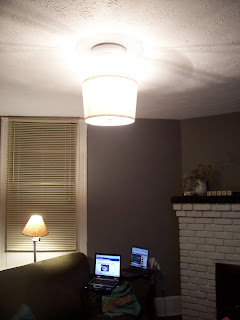 [Middle of a blogpost picture]