The worst thing to happen to your carefully crafted DIY project planning are those crazy "spur of the moment" projects you think you can throw into the mix at the drop of a hat because "it'll only take us a few minutes".

Rrrright!
Nothing. Absolutely nothing takes just a few minutes. Ever.
Really.

Anyways, we were just about done tiling (and with the world) when husband decided he didn't want to waste a handful of thinset left at the very bottom of the bucket. We might as well use that for the fence.

The fence. This was this week's brilliant spur of the moment idea: moving our fence to the actual property line. You know, how long could it possibly take to move a fence post and connect a pipe and some chain link fencing, right? Mere minutes. Maybe an hour.
Rrrrright!

A previous owner had installed our fence about 4 feet away from the actual property line and angled one corner to create a funnel effect between our property and the neighboring one. Since it also connected to the back alley that runs the length of our block (a relic from those times when trash wasn't picked up at the curb but away from sight along the back alleys that crisscross the neighborhood) it often served as a short-cut for whoever walked down the alley. Not cool and often somewhat awkward, having friendly strangers, but strangers all the same, walk basically through your yard. Fortunately our sweet neighbor felt the same and with her blessings we moved the fence, closing off the alley access. 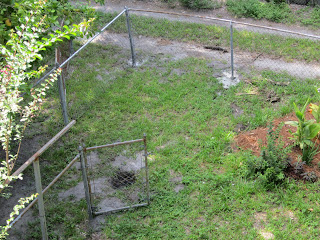 [After: Our yard grew about 6 feet in width and gained an entire corner.
Oh yeah, we still have to remove part of the old fence]
Two hours and a trip to the hardware store later we had a fence that was actually following our property lines in the back. No more cutting through between the houses! And, boy, did our yard grow! Changing the fence line added a huge chunk to our yard that now feels about twice its size (even though it's still on the small side -plenty of weeds to whack for me).

So far, so good. We haven't heard any complaints but the neighborhood cats learned of the changed fence line the hard way: a late night kerfuffle ended with the sounds of a cat running into the fence and bouncing off of it. Surprise!

So, what kind of impromptu half-finished project have you thrown into your carefully planned DIY weekend lately?
Posted by Micha @ A little old house at 7:49 AM

Email ThisBlogThis!Share to TwitterShare to FacebookShare to Pinterest
Labels: Before-After, fence, outside, yard