My husband has this inexplicable thing for this coffee table. It's got to be sentimental, you know, one of the first pieces of furniture he acquired and to quote the husband "it's solid wood!". Right. It's a rectangular, solid wood coffee table. Other than that, it's plain. So plain, it's ugly. When I first encountered The Coffee Table it was golden oak with plenty of bachelor-pad-style stains and water rings. Still, it was solid wood and the husband liked it. Siiiiigh ....
Determined to make do with what we as newly-weds and initially single income family had, I tolerated The Coffee Table. Mostly, I tried to cover it up with runners and table scape arrangements. Then, one day, I had the bright idea to paint it. I'd tried to sand and remove all of the nasty stains but they'd soaked into the wood so thoroughly and deeply, paint was the only way to go because, you know, we couldn't just get a different table and replace my husband's beloved coffee table.

No, I don't think I have old pictures of it. In fact, until today I didn't have any pictures of it at all. No, I really am not crazy about this thing ...

A couple of weeks ago I decided that The Coffee Table was too tall for our current arrangement of furniture and in relation to the fireplace next to it. The Coffee Table was like the gangly awkward teenage cousin that stands out uncomfortably during a family reunion. Something had to happen ....something ...

That's when I broke out the saw and chopped off the legs.

Well, I shortened them and yes, I should have measured twice and cut once because they are now a little too short. Just a bit. like an inch, perhaps. I slapped some casters on them because we always push it around (it's large and often gets in the way or is either too far away or too close) and I needed something to stop it from scratching up my pretty pretty hardwood floors.

Over the next couple of weeks, the stump-legged version of The Coffee Table grew on me. Heh. If I added a shelf by placing it on top of a sheet of plywood cut to size and then added short legs (maybe fat round ones?), it'd actually not be half bad. There'd be room for small baskets underneath to corral and contain the mess of books and toys that seem to collect around it all the time.

Well, I haven't gotten to that part yet. I did, however, paint it again because a dark-brown table against a dark-brown couch against dark-brown floors just wasn't working. No, really.

And NOW I finally have some pictures! Phew! Took me long enough, hm?

I dragged the thing out into the back yard and gave it a thorough sanding. years ago, I'd used heavy-duty floor paint and it had worked like a charm but I figured it'd need some abuse aka sanding before paint would stick to it. 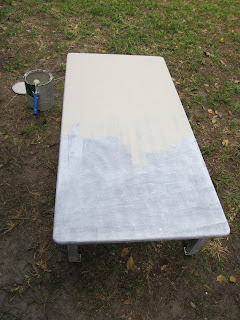 [No turning back now ...]
After sanding I wiped it down with deglosser. Yes, it's painfully obvious how much I want paint to stick. Must be all that flaky paint surrounding me. It's a bad influence.

There's no shortage of paint and primer around this house. On went a coat of primer! It actually held up to the "nail scratch test" once it had dried. It makes me happy when the primer doesn't peel off, yes, it does!

Our livingroom needed a splash of light, but figuring that white would be too bright (and it's really not a piece of furniture that would need any help sticking out like a sore thumb for the most part) so I grabbed the bucket of Woodlawn Colonial Grey and went to town. Well, I painted that is.
Two coats later I started to see the light. Oh my, so much better! 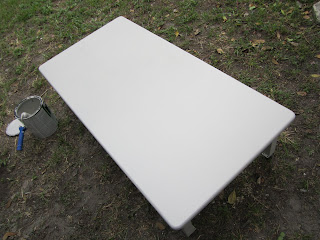 [A clean slate]
However, a grey table with no visual interest whatsoever is about as exciting as a lump of plumber's putty.

Stencil to the rescue! 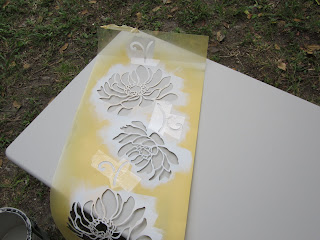 [I'm loving this stencil. Really, I do]

Two shades of grey and some bright glossy white for a layered effect, and some stenciling later, I was slowly falling in love. This -could- actually work! So here it is in its current state: fresh paint, fresh design and sealed with Varathane for added protection. 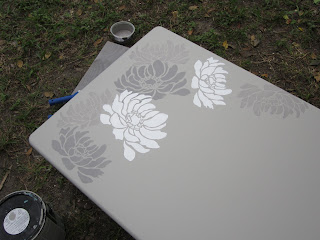 Now I need to find some time to run over to the store to have them cut a piece of wood for me to build up that lower shelf I'm thinking about and buy 4 stumpy legs and all will be well with the world. 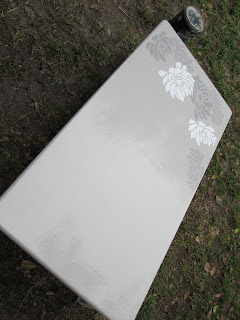 [All shiny and new-looking]