Right after I discovered that Little Man still believes in Santa, I -had- to get me one of those elves from "The Elf on the Shelf". Target was (is?) selling them for the same price as online but you don't pay shipping and as an added perk you got (get?) a $5 giftcard, so after dropping off the kids at school last week I made a quick detour, hopped into the store and bought me a Santa's helper.

All morning at work, I was distracted by plotting possible elfcapades and especially the arrival of our new friend. There are gazillion webpages out there, if you're lacking for ideas on what to do with your elf, like this one here at Blossom Bunkhouse. Pinterest doesn't leave yo hanging either and provides a treasure trove of ideas.

Husband was very skeptic, I wasn't 100% sure it would work but Little Man's been eating this whole thing about the elf and his escapades up. He's nuts about the little guy and his antics and husband and I are having a great time staging Santa's little helper every night. (We were also thoroughly amused by some bad elf on the shelf escapades we found on the web' and are convinced the elf offers some naughty amusement for adults without children. Just sayin' ...) 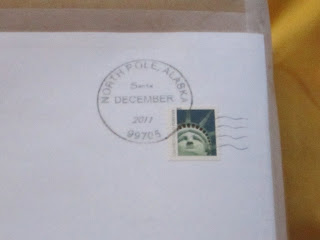 Santa mailed our elf. I searched the web until I found a 2011 Santa mailing stamp picture and printed that with our address and Santa's on a sheet of paper. I stuck a real stamp on our package (Little Man doesn't has never paid attention to postage on a package) and continued the lines of the stamp with pencil to make it look just right. Little Man bought it, so it obviously worked!

Our elf's name is "Barrigade", a name Little Man derived from the word "Barricade". I have no clue why but it does have a nice ring to it. 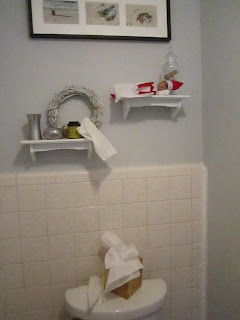 After his first trip to the North Pole to report to Santa, Barrigade ended up making a bed for himself in the downstair's half bath. 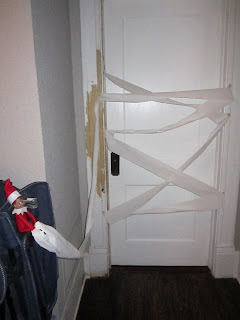 The next night, Barrigade - true to his name - barricaded the door to the guest bedroom with toilet paper. Little Man loves to camp out in the guest bedroom on the weekend - his special treat - and so far this was the funniest elfcapade. He did not see that one coming! Neither did the husband. Heh :o) 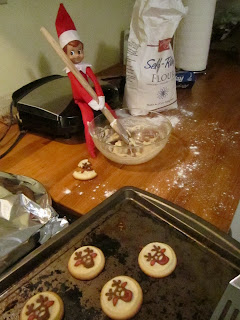 Barrigade used the cover of the night to bake us some special reindeer cookies. He made a real mess in the kitchen and did not clean up. Bad elf, no cookie! 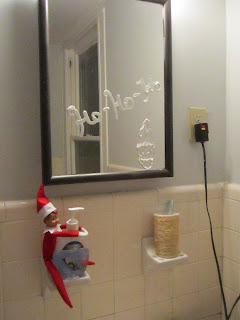 Last night Barricade went to town with toothpaste! Hopefully B's nice design and handwriting will inspire Little Man to stop smearing his toothpaste over the window (he does that; I don't know why) and expand his artistic toothpaste expressions beyond the occasional smiley face.

I'm looking forward to the next couple of nights, cackling and rubbing my hands gleefully.
Posted by Micha @ A little old house at 7:38 AM

Email ThisBlogThis!Share to TwitterShare to FacebookShare to Pinterest
Labels: Elf on the shelf, Holidays