Well, not Carmen Sandiego, that's for sure. I doubt that fickle lady with the shady reputation ever had a permanent address, let alone one in Historic Springfield. She would, however, make a great addition to our "First Friday" parties, don't you think? 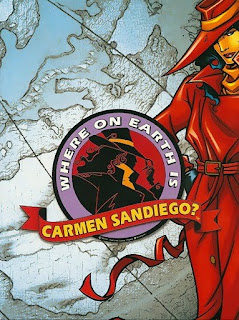 With our first year anniversary coming up in just two more days, I thought I'd share a bit more histoy of our little old house.

The person I was looking for was the builder of our Little Old House and its sister houses to the left. All I knew up until about two weeks ago was that somebody named E.F. Rainey built four houses in Historic Springfield, including ours, at the tailend of the Springfield boom years. Three of those four are still standing today, and all three are inhabitated and in good repair, still sporting at least some of their original features, both inside and out.

After the holidays I wasn't feeling too keen on picking up the trim painting brush again (Surprise!) and instead buried my nose deep in census files, deat

h, marriage and birth records and generally went research-crazy over at Familysearch.org .

And guess what?
I found him!

E. F. Rainey is Edward F. Rainey. He and his three brothers moved to Jacksonville from North Carolina in the early 1900s to benefit from the building boom in Jacksonville. In 1920, Edward was 29 years old which means he was a barely out of the cradle and walking when he built those houses, ours included. Kidding.

So, Edward was 23 when he built the Ugly Duckling and its sister houses bringing along his crew in form of his brothers:
Jesse (also spelled Jessie), Edward's older brother by two years, listed as profession "Real Estate".
Virona Glenn, two years younger than Edward, was the painter in the family.
And the youngest, Joseph, must have been barely released from his apprenticeship when he worked as Electrician.

Electrician at 16 - scaaary! Then again, he must have done things right because the houses are still standing and didn't burn down. Lucky us!

Back then the band of brothers lived at Walnut Street, and while I have been able to find both Jessie (Jessie remained a bachelor until at least 1935 and lived at 1644 Main St.) and Virona Glenn (who got married to Ms Hazel Bonnie Southworth on February 25, 1939, in Riverside) in later years , Edward and Joseph have fallen off the radar and are eluding me so far.

I'm really excited to have found out about Edward and his brothers, and hope to dig up more about them to learn more about the people who built our house (and our neighbors' houses). With a little luck I might be able to dig up a picture of the house that has been lost over time. I wonder if it looks anything like the other three?
Posted by Micha @ A little old house at 9:42 AM