While Little Man has outgrown the stage where a dark room with light-blocking curtains guarantees long naps and sleeping in late in the mornings (no more naps and he's just as much of an early bird as his mom), it is still nice to have some window treatments. Privacy is a good reason although even our next door neighbor doesn't get much more of a glimpse of the ....err, creative chaos that reigns supreme in his room. Mom here simply likes the finished look that window treatments add to a room.

So after some debating and looking at options we decided on Roman shades like the ones we have in our kitchen. And just like our kitchen shades, I made Little Man's shades by hand. We found a fabric with navy and white stripes to match his accent wall and following the instructions from "The Little Green Notebook" whipped up a pair of one-of-a-kind roman shades. 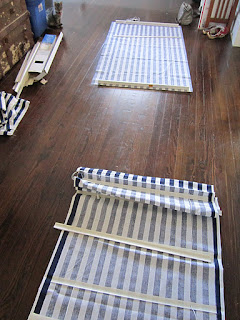 The entry hall works great for projects like this: lots of open floor space to spread out. In the upper left corner of the photo you can spy my youngest assistant of the feline sort just waiting for the right moment to pounce into the midst of things! 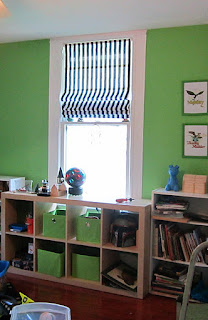 And two hours later, Little Man was one step closer to a finished room! Weird how we sometimes end up procrastinating on projects that come together so quickly and, once done, make things look so much nicer.

Have you ever tried to make your own roman shades? Which instructions did you follow? I can't believe how easy it is and how quick you can whip up some custom roman shades in your favorite fabric!