Not So Wordless Wednesday on Monday 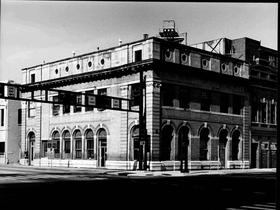 The Bostwick Building in its heyday (source)

"A building does not have to be an important work of architecture to become a first-rate landmark. Landmarks are not created by architects. They are fashioned by those who encounter them after they are built. The essential feature of a landmark is not its design, but the place it holds in a city's memory. Compared to the place it occupies in social history, a landmark's artistic qualities are incidental."
Herbert Muschamp 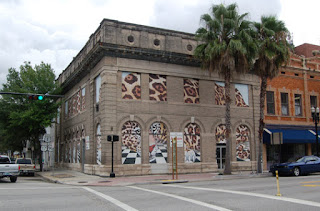 I had originally planned to use the picture of the Bostwick Building aka the Jaguar Building for my "Wordless Wednesday" post but I thought this building deserves more publicity, more public outcry, more love and support, more of us.

The Bostwick building is one of the few remaining historic buildings downtown Jacksonville. It's on a very prominent location, occupying the corner of East Bay Street and Ocean Street. Chances are you have seen it, especially since the crouching jaguar painted over its boarded windows is so eye catching. Built in 1902 it stood silent witness to the Great Fire and has remained in its family's hands.

You would think that's a good thing.

While in most cases it's the houses that are passed from hand to hand, from uncaring investor to short-time owner, that suffer the most, the Bostwick Building has been ignored and neglected by its family like an unwanted stepchild. Go here for a look at what it looks like on the inside.

It has stood empty for the past 25 years. It is as good as gutted, hunkering down under a failing roof, and bidding its time waiting patiently for a kind hand that would restore it to former glory.

The Bostwick family? The family who has owned the building since its construction has applied for a demolition permit. They want to tear it down, adding yet another overgrown empty lot to our downtown's ravaged landscape.

...because nobody is willing to pay their current asking price of $325,00 (for a small lot with a condemned building)
... because nobody has been willing to pay their past asking price of $1.000.000 in past years (for a small lot with a neglected, condemned building).
They have received bids.
Bids for -double- the appraised value of the lot (which is $76.000).
Bids by people who even want to restore the building, no matter the cost of the restoration.
But, oh no, that's not enough. That's not enough money to those who are currently  incurring several hundred dollars in daily fines for code violations, would have to pay about $40.000 in demolition costs and in the end would sit on an empty, weedy lot like so many others in downtown Jacksonville, leaving this city one historic building poorer.

Oh, and do the math. Just for kicks and giggles.
You would think that a family who prizes themselves as the original owners would realize the value in finding somebody who is willing to undertake the costly and arduous restoration of such a building but noooo .... on Tuesday, January 17, 2013, we will hear both, the Bostwick family appealing the denial of the demolition and the Historic Preservation Committee's application of Landmark status of the Bostwick Building.

Care to raise your voice for the Bostwick Building?
Email these committee members and let them know how important, how truly non-negotiable the preservation of our historic buildings is

"We will probably be judged not by the monuments we build  but by those we have destroyed."
New York Times Editorial

I'd rather be known as somebody who spoke up for preservation of our city's heritage. How about you?