What?
A make-over already?

Fear not! Little Man's Cave remains mostly untouched. He still loves his grassy green walls and navy and white stripe accent wall but for some reason the layout wasn't working.

And just like that, the room failed and began to accumulate stuff and clutter while Little Man evaded the mess by bringing his toys downstairs rather than putting his room to good use. Kind of like the problem we had with our front porch (read about it here). Speaking of the porch, I'm happy to proclaim it's as tidy as on its first day!

Back to the Little Man Cave: the large desk made it feel crowded, he couldn't reach some of the cubbies underneath and it went downhill from there. One night - I was curled up on the couch with a kitty and a cup of tea - I ended up doodling on a piece of paper trying to figure out how to solve the problem. 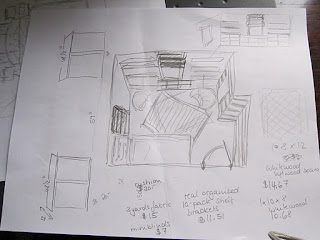 [Design doodle: not to scale]

Little Man needed to be able to easily access all of the cubbies of the larger IKEA shelf and the smaller book shelves. So I moved them to the opposite wall and lined them up alongside. They fit EXACTLY! With maybe an inch on either side to spare! His bed, I decided, needed to move back against the wall without a window and for the moment, I set the desk aside and decided it'd be better if he just had a large space in the center of his room (with a rug) to play and romp around. Little Man does his homework at the dining room table with me sitting across from him, so he doesn't really need a desk in his room.

I'll spare you the "Before". It was an awful mess and it took us from start to finish about four hours to move furniture, to sort out and to sort in, and to put everything back in place. 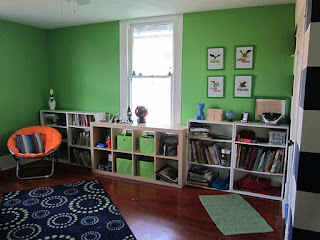 So - much - better!
Little Man declared he liked it and the fact that he's actually using his room and spending time in it rather than hauling his toys downstairs is proof of that. As for me? I'm able to breathe now and don't break into panic attacks when setting foot into this part of the house ... heh.

This concludes Phase 1 of the Little Man Cave shuffle. I have more plans for window treatments, open shelving and art so expect to see more of Little Man's Green Cave here soon.
Posted by Micha @ A little old house at 6:19 PM