After more than a year of no demolitions we lost two houses to so-called emergency demolitions through Code Enforcement within the last four weeks.

Something is foul in the State of Denmark ... would Hamlet say, and we are again in need to raise our voices and fight for the preservation of our nationally registered historic district. It's bizarre - you would think that this is a no-brainer - but time and time again we have run into the same scenario where houses are torn down for thousands of dollars in tax payer money rather than mothballed and preserved for a fraction of the cost and less devastating to the architectural and cultural heritage of the city. 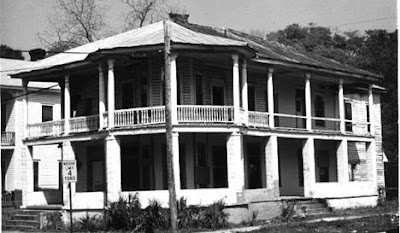 This house is no longer. Just a few houses down from the last 'emergency' demolition, this former boarding house with the massive wrap-around porch was destroyed last Friday - nevermind the fact it had official NSP funding and was a restoration in progress with new trusses, studs, and duct work. The mind boggles.

You see, an emergency demolition means it poses an 'immediate threat to the physical safety of the public'. How a house can pose such a threat if it refuses to fold and collapse even after a bulldozer has been eviscerating it for four hours is beyond me.

Something is obviously foul in the State of Denmark.

Councilman Robin Lumb has already voiced his support, standing up once again in support for our historic districts, but we need your support as well!