This year, summer was a truly Floridian summer. When I moved to Florida almost ten years ago, you could set your clock to the afternoon rains. Every day, usually between 3pm and 4pm the clouds would move in, the skies opened up and it rained buckets. BIG buckets. Half an hour later, the sun was shining again from a bright blue sky and you would be none the wiser unless, you know, you left your car's windows open or forgot to close up your convertible ....ahem. Not like the husband would know anything about that ...heh.

Anyways, drought set in and had been plaguing Florida for the past years. There were sometime weeks between rainfalls and wildfires raged all over the State. We had days where ashes would fall from the sky like snow flurries and the sky was cast in a dirty pink glow from the distant fires. Apocalyptic, in one word.

This year we are obviously back to good ol' times. It's been raining.
A LOT!
I don't think we ever had a week with more than one day of no rain. Combined with the sun and the heat it created a true greenhouse effect for all plants outdoor. Wee whacking has never been so demanding - weeds wouldn't stop growing and all the plants in the backyard were trying to outdo each other! It's absolutely crazy!

One of the things that grew almost as tall as I am is my blue salvia in the backyard. It had grown so tall that it started falling over and so I decided to cut it back.

I loved the armful of salvia with its tall delicate spires of bright royal-blue flowers and rather than throwing it on the compost pile, I brought them inside. 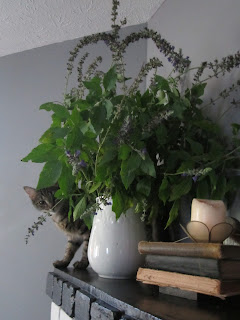 Here's where Pottery Barn meets Restoration Hardware again - I plunked my bounty into a white ceramic pitcher and simply placed it on the fire place mantel - much to Inky-Binky's delight! She had to photobomb this display and continued to love on the flowers all day.

I don't know what it is about this cat and flowers. The moment I present her with a bouquet she goes into pretty-pretty princess mode and lounges right underneath the flowers. She is really good abut not trying to eat them or to rip them out, but her behavior is slightly odd. 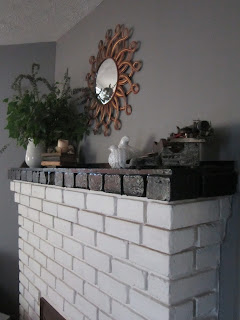 Yes, Binky is in this picture; she is actually hiding behind the flowers. Silly cat! I really like how the decor on the fire place mantel came together. It's simple, I'm not big into knickknacks and decorating rules and staging but this looks pretty neat, if I may say so myself! It really makes me think about growing a few more cut-type flowers in the yard ...

I know that stores are going nuts already with fall decorations, and even Halloween displays, and so is pinterest but I just can't make myself break out the typical fall ingredients just yet. I mean, it's just September, right? Gah, it's already September! Only 126 more days until Christmas!

Everybody run for their lives!
Posted by Micha @ A little old house at 8:30 AM