I promised projects and posts and pictures, and you shall have all three!

So, sometime in the last year or so I got bit by the Arts & Crafts bug. No, not the DIY kind of bug but the Craftsman style design movement of the 1900s. The Arts and Crafts movement was an international design movement that flourished between 1880 and 1910, especially in the second half of that period, continuing its influence until the 1930s. It stood for traditional craftsmanship using simple forms and often applied medieval, romantic or folk styles of decoration. Colors were earthy, craftsmanship impeccable, decorating non-frilly and simple. To me it is best summed up as "Hobbit House Style." If you consider Bilbo Baggins' cozy abode as seen in the movies "Lord of the Rings" and "The Hobbit" the perfect home, you might be a candidate for the Arts & Crafts style.

Our house was built in 1914, toward the tail end of the Arts & Crafts movement, and while it's not a stereotypical example of arts & crafts architecture, it does feature some elements that hint at it like dominant brackets bearing the roof, exposed rafter tails, and more. And I really really love Bilbo Baggins' home. So much that it suckered me right into the Arts & Crafts design boards on Pinterest. While I'm not willing to go back and strip all of the freshly painted white trim work inside my little old house, I have slowly begun to add Arts & Crafts touches to our house. More on that in days to come!

A simple and much quicker Arts & Crafts update to our beloved dining room was to refresh our dining room set. Because, you know, I didn't have any other, more pressing projects lined up four weeks before my parents' visit. 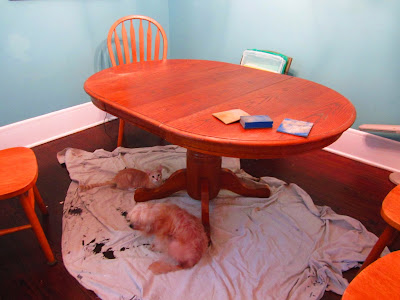 Here is our dining room set pictured with two of the available furry supervisors: Athena, the cat, and Roomba, our foster pup. Everybody else didn't make it into the shot - too slow! The photo isn't great - the table isn't bright orange, I swear! - but you have seen this table and chair set before. It's a plain honey oak color - nothing to write home about. 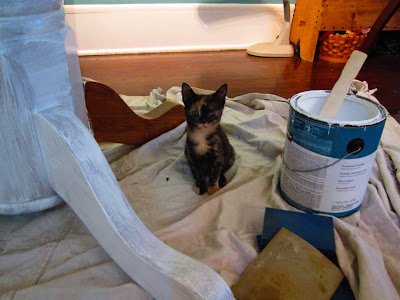 In order to tie everything together I decided on a two-tone color scheme for the table with the pedestal in white and a stained top. A quick sanding and priming ensured the paint would stick and stand up to occasional misplaced kicks under the table.
Here, another supervisor joins the crowd - Turtle, the tortoise kitten. She came to us as a foster kitten through the local animal shelter as a two week old bottle baby, and while she eats for two, she has a hard time growing. She just now, after four months, finally made it past the two pound mark required for surgery (she needs to be spayed before she can go out for adoption). She's stinking cute but somewhat weird. She likes to watch and observe a lot, teeny head cocked a bit sideways, looking slightly bewildered. 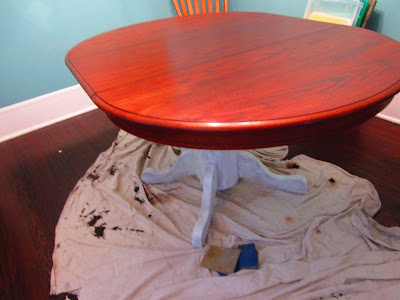 My furry supervisors got bored after a while and wandered off to take a nap giving me free reign and a paw- and furless working environment. That was really essential for staining the top. I went with General Finished Gel Stain in Candlelit (get it here, for example) after reading plenty of sites and reviews on the ease of using it on other typical blonde honey oak cabinets. Most seem to use Java but I didn't want to go that dark. 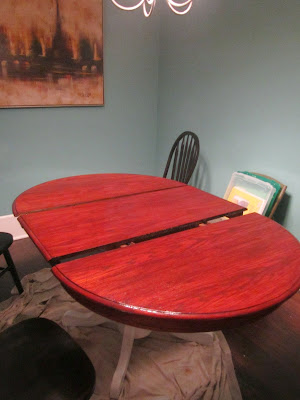 It's nowhere near as red as it appears here. It's a warm, almost mahogany type of brown, very rich and 'glowy.' I loved working with the gel stain which went on smoothly and evenly without the need for wood conditioners, massive sanding, and more, like with usual wood stains.I had bought a quart of General Finishes Poly in Satin to seal the top, and working with that was just as easy. Three coats and the top is super silky smooth, and looks terrific! 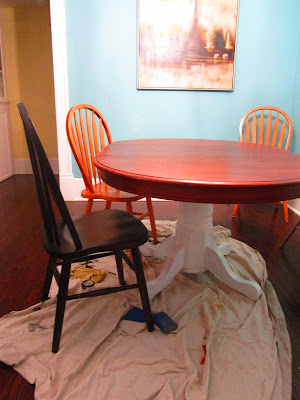 After finishing the table I debated what to do with the chairs. Two-tone looks for them? Stain only? Both, Big Man and Little Man, vetoed these and suggested black chairs.
I wasn't 100% sold on the idea but forged ahead, and what can I say? My men were right - The black chairs work great with the two tone table! 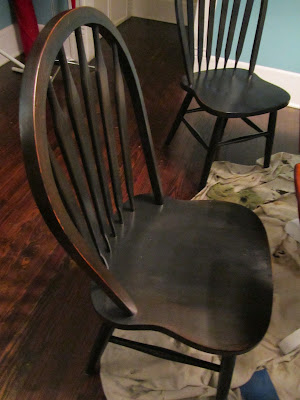 After painting the chairs black, I sanded the edges a bit for an aged look and used the gel stain as a glaze - lovely!