Ever since I saw a certain place mat at Target, whipping up a pillow from it has been on my to-do-list. So I waited until the deadline was almost as tight as it could get, until I was in over my head in last minute but have to finish before Monday projects and swung by the store to pick up the supplies I needed: 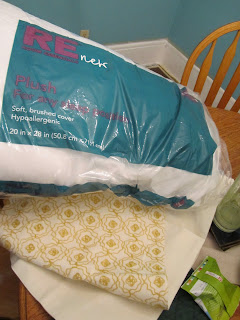 I grabbed two place mats and a basic pillow to use as filling. Lucky me, they were on sale so my inserts only cost me $4 total! 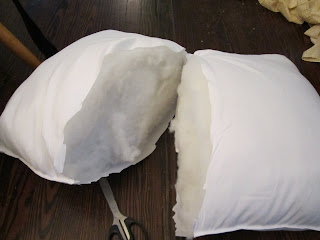 I took the pillow and simply chopped it into half! At first I thought about pulling the pillow stuffing out and stuffing it into the place mat, but then decided I needed a solution that would allow me to take the pillows apart more easily say for washing or replacing when the mood strikes.

So I pinched each pillow half tightly (I hardly ever pin) along the open side and ran it through the sewing machine. It took a lot of pinching fu to keep the open edges together but in the end I managed. Pinning them wouldn't have made it any easier, I'm sure. The filling is so poofy, you need bodily force to squash it and keep it flat enough to end up with enough fabric for the sewing machine to catch. 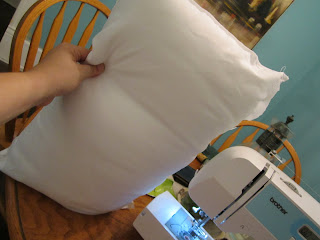 Not the prettiest edge but it'll be inside the pillow case and thus invisible! 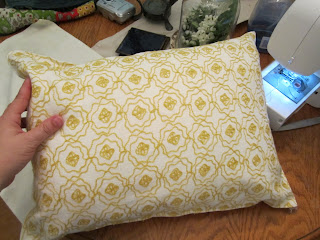 After that, things got really simple: the place mats are lined so all I did was open up the seam along a short side, squeezed the pillow insert I just made in and whip-stitched the opening close again.
Tada!
A pretty pillow!
Rinse and repeat as often as you like!
Posted by Micha @ A little old house at 7:51 AM

Email ThisBlogThis!Share to TwitterShare to FacebookShare to Pinterest
Labels: projects