You will hear a lot of people in Florida complain that "there are no seasons." That there is only "hot" and "hot and humid." Well, up here in North Florida that's really not true. Granted you have to look a bit more closely and the signs of seasons changing over aren't quite 'in your face' like further up north, but - newsflash! - we do have four actual seasons.

Right now, we are at the beginning of fall. Summer is in its final death throes throwing heat and humidity at us during the day but clearly running out of steam because the nights have started to cool down again. And the leaves. Ugh, the leaves!

Mrs Massive Crape Myrtle in our front yard has clearly joined the fall movement and is dropping everything. Every.little.discolored.leaf.
And there are a lot of them.

Combined with the heat, humidity and a lot of rain it made our front yard look like crape ...err, crap! 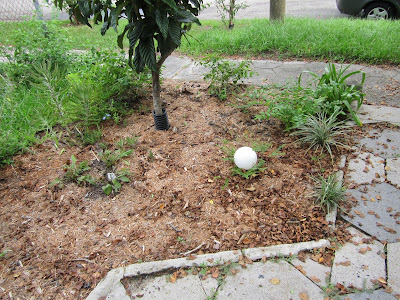 Ugh .... just ....ugh. Brown leaves everywhere, the grass is taking over the crow (or death strip - I really like death strip, heh, so dramatic!) and there are weeds! 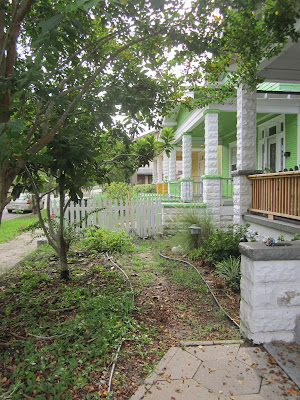 More brown leaves, more weeds.
Ugh!
And the lilies that won't die. No matter how often I cut them back and try to dig them up, they keep coming back. Short of excavating the entire front yard there is just no getting rid of them. 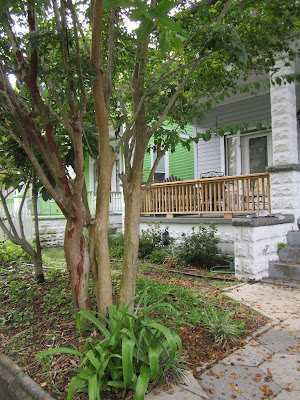 Last weekend I finally found time to take care of the front yard - it was in dire need of a major clean-up - and after picking up a few fresh, bright pink Pentas, buckled down and went to town! 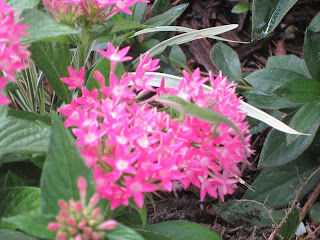 [See the little green Anole taking a sunbath on the flowers?]

Armed with my trusted Japanese gardening knife Little Man and I dug up buckets full of weeds from between the pavers and along the walkway. We raked and swept trying to remove as many brown leaves from between our ground cover plants so they'd have an easier time filling in.

We'd originally considered other types of ground covers such as thyme and even perennial peanut but thanks to those cuttings from a generous neighbor we ended up with this dark-green, daisy-like spreading plant that fares equally well in both shade and sun and even underneath the trees, no matter how much we neglect it. That stuff is definitely a keeper. It's slowly filling in the front, a slow and steady process sped up by my cutting and creating new cuts every now and then. 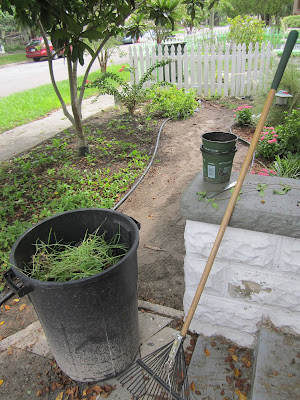 Once we'd tackled the weeds, things were starting to look up! The Pentas we planted added a nice pop of fresh color amidst all of the lush green and they have the added benefit of being bee-, butterfly- and drought friendly perennials. 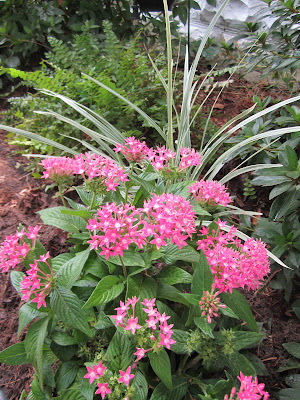 Ferns, variegated Liriope, Azaleas and (struggling) hostas make for a nice pattern and texture mix in our planting bed in the front yard.

After the weeds we tackled all of the brown leaves the Crape Myrtle had dumped on our little front yard. Boy, there were a lot of leaves with more still to go. We'll be sweeping for a little while longer. 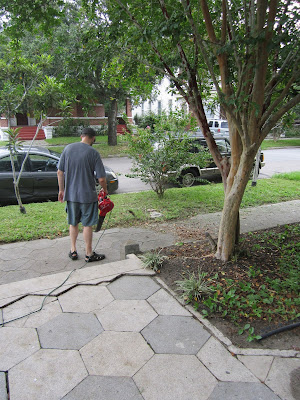 Husband laughed at me when I bought the leafblower but I love love love how giving everything a quick 'blow' makes it look so nice and clean and tidy! I let him play with it while I was finishing up a quick tidy-up on the porch, and he seemed to be having fun with my toy. 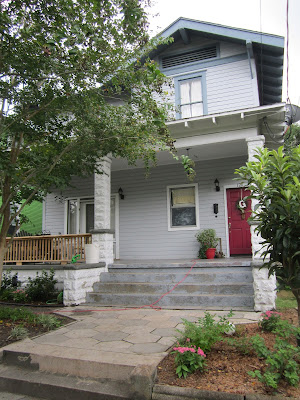 Ta-da! All nice and clean and tidy and fresh! I'm still holding off on changing everything to fall colors and introducing pumpkins and their ilk, because, y'know, it just doesn't feel right yet. I know retail stores are lightyears ahead, the shelves arlready packed with Halloween and Thanksgiving but, man, it's just September ... eh!
Posted by Micha @ A little old house at 12:38 PM

Email ThisBlogThis!Share to TwitterShare to FacebookShare to Pinterest
Labels: yard