Just so you know, I -do- plan on taking my camera along to snap Before, In-Progress and After pictures, it's simply that over the excitement of getting started I flat out forgot today. [And my grin right now is probably just as sheepish as that statement sounds].

So what did we do? Mrs G and Sam rocked the demo of the upstairs kitchen aka the future master bath room. Sam destroying the upstairs tile really spurred me on - nothing keeps you going like the sweet sound of demolition. I piddled around - I swept the library, took off an ugly 70s door in the hallway and another one on the pantry in the kitchen, took out shelves, cleaned up the lilies in the front yard [which, miraculously, seem to be alive underneath all that dead stuff on top] and then decided to get started on tearing out the gross linoleum floor in the downstairs kitchen. 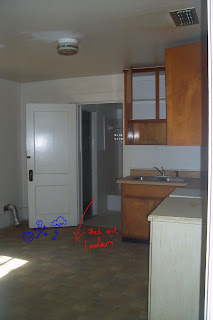 [Look! It's a gross Before-picture! Taken from the breezeway looking into the kitchen with the open door toward the now bathroom, soon-to-be mudroom-laundry area. Yes, that is a dryer vent sticking out from the wall to the right - nevermind that code doesn't allow an appliance butting up against the electric panel behind the open door. That, too, shall change. And no, it wasn't the kitchen that made us fall in love with the Ugly Duckling ... heh]

I'm now convinced that for the simple thought of gluing linoleum to wood floors you either spend 100-200 years longer in purgatory or go straight to hell. As rewarding as it is to rip it out, it's a real pain in the behind and it's not as if you could buy a stripping agent or other chemical concoction that will help you get rid of it. Oh no. No such thing. It all boils down to elbow grease. Lots of it. Oh, it comes up nice and in big chunks along the outer perimeter but once you get near the areas with foot traffic, like in the middle of the room and in the little breezeway, it STICKS like nobody's business and chips off in quarter sized chips.

I'll be back tomorrow, better armed, and show it who's the boss. Muhahaha ... just wait and see!
Posted by Micha @ A little old house at 7:35 PM