Taking a shower is such a modern convenience it's hard to imagine a time when all you did was wash up and every once in a while take a bath. Living in an older house you are, however, reminded of this time. Clawfoot tubs are great for taking a hot bath, especially the cast iron tubs that stay hot forever as soon as the water has heated up the cast iron. That taking an actual shower came as an after thought you can easily tell by the awkward curtain rigs and contraptions holding a handheld shower up or extensions to create a shower 'spout' -they are not the prettiest things to look at, especially if the tub is somewhat freestanding (it's not quite to out of place if the tub is tucked into a corner).

When we turned the upstair's kitchen into our master bath one of the must-haves was a clawfoot tub - you clearly can't have a historic home without one! - and we scored an amazing deal on a beautiful acrylic tub with gorgeous chrome feet (more about that here).
All the looks but none of the weight!

Except, no way to shower. After much hemming and hawing we finally discovered the Kvartal curtain track system at IKEA and decided that that might be the best "out of the way/sight" option to add some shower curtains to our bath tub. 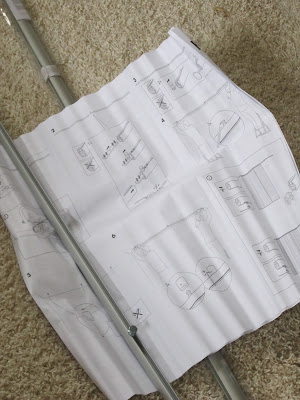 The KVARTAL system offers two attachment options: wall-mounted and ceiling mounted. We bought all the pieces to create a 5'x 3.5' large rectangular track system to hang right above our tub. Little Man and husband had a great time putting it together! 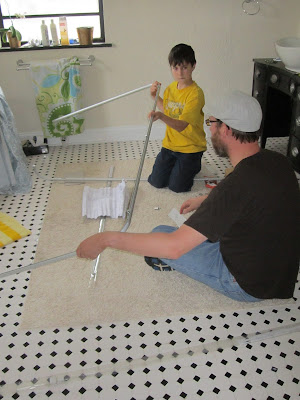 We decided for a set-up that is much wider than our tub because after installing the curved shower rod in our hall bathroom we had learned to appreciate the extra elbow space.

No more cold shower curtains sticking to your wet skin!

You definitely need two people to hang the curtain track from the ceiling (one holding, the other marking and drilling and screwing) but in the end the whole project was rather straightforward and simple. 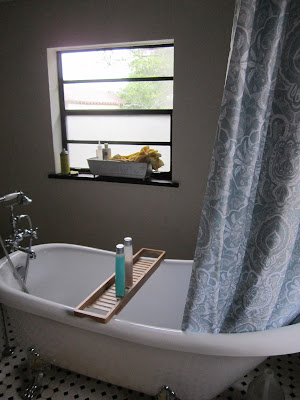 And we now have shower curtains! I picked these up at Wally World months ago because the color scheme matches the ongoing theme in bedroom, dressing room and bath room just perfectly. It really picks up on the seaglass colored ceiling and ties it all together.

I hope they are still selling them because while I bought two, having another one for more overlap would be even better. 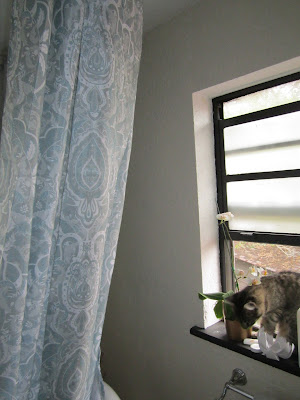 My "Three of Three" for our master bathroom are coming along nicely:

Now all that's left to do is tackle the closet, frame out a separation and install shelves and I get to check off this room! Woot!

I took me three rooms to notice a certain ...ahem, trend, though: As you can see, the third project on each room's list so far has been the one that is the most involved and will take the longest.So in order to keep this blog hopping, I'll have to continue my room hopping as well.