Let There Be Light!

The husband is switching positions within the company, and thought it would be a good time to take a few days off between taking off one hat and putting on another.

I was being a good wife and did not prepare a "honey-do" list for him but instead let him enjoy sleeping in, a cup of coffee with the morning paper and all the oodling about he could possibly squeeze into the day while I was at work and Little Man at school.
Yes, it was hard.
Yes, I was twitching on the inside biting back 'helpful suggestions' regarding things I'd like to see done that week.
Man, it was hard!

On the other hand, it was all the more rewarding to come home from work to discover he had tackled a project while I wasn't supervising and ...ahem, delegating! 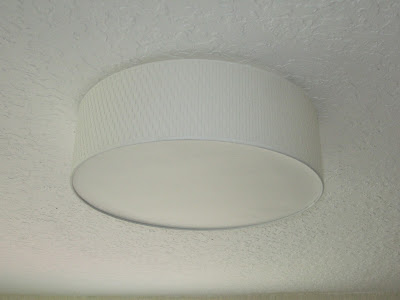 It's a ceiling light! In the master bathroom! I'd picked up another ALÄNG ceiling light fixture at IKEA during my weekend in Tampa a few weeks ago. We liked the look of the smaller fixture we installed in the dressing room so much and thought it would also go beautifully with the texture of our vanity light shades that we decided to replace the shiny brass nipple fixture in our master bath with the larger version (since the bathroom is also much larger; it's a whopping ~12'x13'). 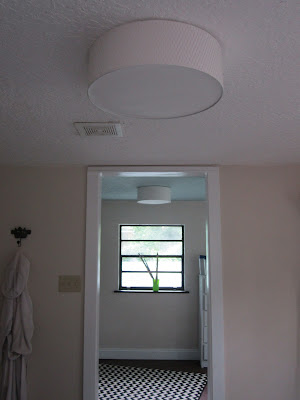 So, because Super-Husband installed it as a surprise, there are no 'Before' pictures - no biggie, nobody really needs to see the brassy nipple fixture that wasn't doing anything for our bathroom in regard to light or looks - only 'After'. It's so much prettier and so much brighter now, and we have a more cohesive look between the dressing room and the adjoining bathroom now.

And I didn't have to nag once!
Awesome!
Posted by Micha @ A little old house at 7:20 AM