Last Saturday we kicked off the Big Move with "U-Haul Day". We'd rented a truck and had planned to move as much of the software aka anything smaller than a book shelf and lighter than a washing machine we wouldn't need for the remainder of our time over at our rental apartment. 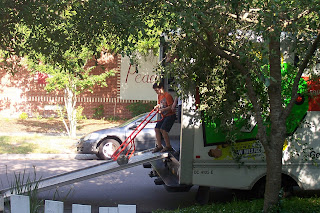 We started early in the morning. No, really! No joke - we were up, dressed and fed by 8am and ready to load with the truck in front of the house just 30 minutes later thanks to living so conveniently to the nearest pick-up station downtown. 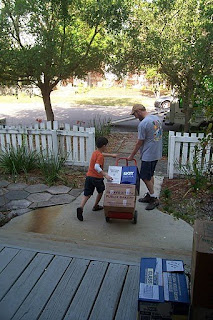 Box after box went down the stairs, onto the dolly and into the truck. Husband commented at some point that the truck started to look like a liquor store on the move (or on the run). Vodka, Rum, Whiskey - you name it, we got it!

It also turned out that our worry that Little Man would be in the way more often than not, was completely unfounded. He enjoyed the adventure so much he kept pulling his weight all day long and collapsed in the evening just like his parents. 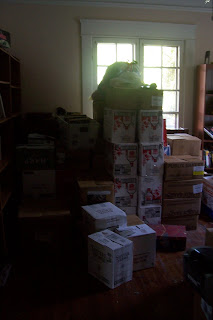 After a while our respectable pre-packed pile started to shrink and we got to see the French Doors leading to our front porch again! Light! There is a light at the end of the ... behind the stacked boxes! 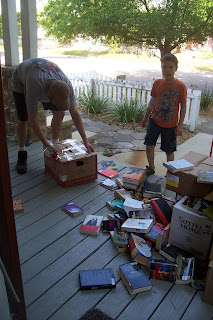 After 4 hours of steady loading and only one (!) brief set back when one of the boxes gave up and barfed up books all over our stoop, we were on our way over to the Duckling to repeat the process, just in reverse 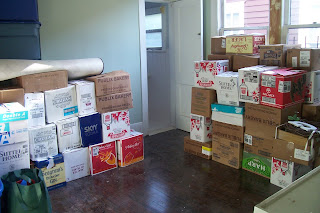 And here is part of our load after arriving safely at its new destination. Over the next couple of days we'll be dropping off smaller loads using our own car as we downsize our household over at the rental bit by bit and on Saturday we have a truck and 3 movers to help us move the big ticket items.

And then we're officially arrived at our new old home! And I will collapse as soon as the door closes behind the last box. Promised!

Email ThisBlogThis!Share to TwitterShare to FacebookShare to Pinterest
Labels: moving