If anybody had told me that it'd take us close to three weeks to move all of our belongings from point A to final destination B, I probably would have shaken my head and laughed. Or run screaming. I mean, come on. How many things could you possibly fit into 3 teeny closets (old houses have really small ones), a narrow butler's pantry and a small back porch?

Turns out, waaay more than expected. Way, way more! And if you thought, you'd been good about sorting and decluttering before the first moving day (of three, total), think again.

We started off strong three weekends ago with a truck from U-Haul and armed with a big load of liquor store boxes. We loaded the entire truck, unloaded it at the Darling Duckling and congratulated ourselves on getting so much moved so easily. Ha! Ha, I say! 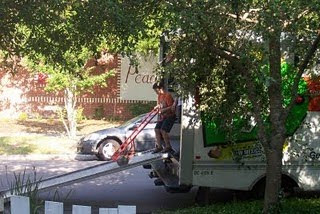 The following week, I made quick runs with smaller single car loads from rental to house but didn't feel too alarmed that the pantry shelves weren't packed into boxes entirely yet. We had planned for another truck and some beefy armed, gutsy movers to help us with the big stuff aka the sleeper sofa, the art desk, dressers, beds and the laundry set-up so we could easily toss another box or two on the truck and be done.

Moving all of our hardware - which isn't much, mind you; When it comes to actual furniture, our abode was and is sparsely equipped, really - took us two trips instead of one. At the end of the day, we were pooped. And there was still stuff left at the rental that needed to be moved. Argh!

Dear husband estimated that we had a good 8 hours of packing and moving left to do and while I took the 2 hours I used to set aside for painting and other DIY projects every day at the Duckling house and packed and moved for the next 4 days, guess what? Yep, there was still MORE.

What on earth $&**(??? It felt like every time we drove one load over, somebody stopped by and dumped a new load into the rental. It was utterly surreal. That couldn't all be our stuff, could it? I mean, where did we keep all of these things?! Truth is, our Butler's Pantry held almost incredible amounts of bits and bops: from tablecloths and vases to tools and discarded electronics and everything in between. 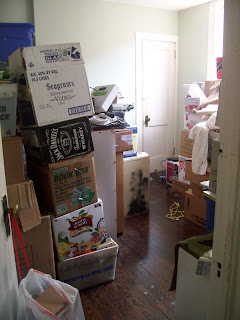 [Packed to the gills]

This past Saturday we made our final push: from 10am until 7pm we packed, loaded, drove, unloaded and headed back again. We sorted mercilessly, until nothing but our bikes and a big for sale/donation pile were left. Sunday we tried our luck at a very short notice "Stuff be gone Sale", made a handful of dollars and then every.single.thing.left went to the curb with a curb alert notice to the local craigslist.

Monday we had a cleaning lady come in to give the apartment a final scrub, we rode the bikes over to the Duckling and it was D-O-N-E. 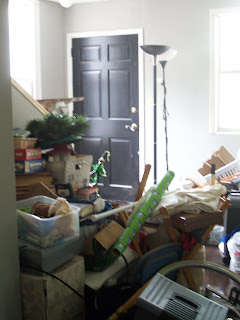 And that would be a great thing if it weren't for the fact that our Darling Duckling is now stuffed with boxes most of which don't have labels ...

This post was brought to you in the spirit of "Keeping it real" ... heh