We've got a connection

We've been back in touch with the ether for a week now but every time I think about it, it makes me giggle. Why, you wonder?

Alright, let me relate the tale of the day the Cable Guy came to visit the Darling Duckling.

`Twas Friday, and the mourning doves
Did gyre and gimble did he came:
All heatin' was the bricket stove,
And the home raths outgrabe.

"Beware the aged wood , my son!
The studs that stand, the joists that catch!
Beware the Jubjub bird, and shun
The frumious Bandersnatch!"

He took his vorpal drill in hand:
Long time he tried as best he ought --
No chance - paused he by the door,
And stood awhile in thought.

And, as in uffish thought he drilled,
The ancient wood, with heart of steel,
fought tooth and nail,
And smoke wafted as he kneeled!

One, two! One, two! And through and through
The vorpal drill went snicker-snack!
A hole here and there ahead
He went a-drilling back.

"And, has thou slain the age old wood?
Come to my arms, my beamish boy!
O frabjous day! Callooh! Callay!'
He chortled in his joy.

Yeah, I know. That was bad. I sure hope Lewis Carroll will forgive my butchering of the Jabberwock's poem. Anyways, the cable man came all set to hook us up with Internet, Phone and TV (we're junkies like that). After poking around the house and obviously happy to hear about where we wanted things placed, he went right to work, updating the cable mess outside before coming back to drill the necessary holes. Right.

He brought out the big drill with a drill bit the length of my arm and then some. Holy Cannoli, I thought he was going to drill all the way to China (or Germany for some extra channels perhaps?).
He moved a couple of boxes to find a convenient spot above the baseboard and next to the window to drill the hole for the phone line, aimed and started drilling.

Until he was leaning against the drill with all his weight at a 25 degree angle. I was wondering if the last load of laundry was finished so I'd have a clean towel to wrap around his bleeding head in case the drill finally went through the wall and he bashed his head against the window frame.

Luckily, the Darling Duckling was looking out for him and us. 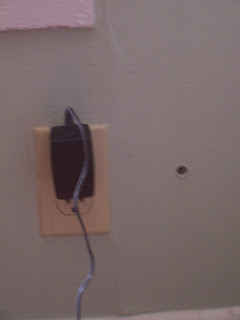 Never heard a more smart-ass answer than that, haven't you? I'm not sure he believed me at first. He tried another spot on the other side of the window (same distance so I guessed he'd hit the stud on the other side ... which he did) and then a few inches next to that hole.

The siding didn't give him as much of a battle and he finally broke through! There's much cheering and rejoicing. I also warned him that he'd only get ONE. SINGLE. SHOT at drilling through my beautifully refinished floors to run the cable for the TV. Fortunately, Cable Guy now knew what to expect and while it took a while he did manage to drill a hole through my floors and subflooring without turning them into Swiss cheese. 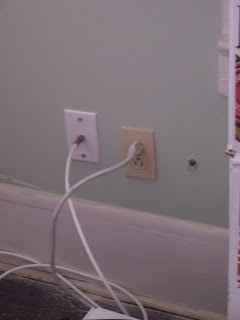 You know, we choose flat finish paint in order to tone down some of the drywall imperfections but right now it's a blessing to have it because touching it up is so much easier. And for some odd reason, there's always a whole lotta touching up going on here ... hmmmph