Let's talk about you and me ... and the amazing fact that our house will get to celebrate its 100th birthday next year.
Not only that, but in 100 years it has also come full circle in regard to its owners. How so, you wonder?

I'm so excited to share this with you! When our house was ready to move in for the first time in 1914, the first couple to ever live in the Little Old House - when the plaster had just dried and the paint was still fresh - were Henry and Emma Stukenberg. Both, henry and Emma, were half-German, born to immigrant parents from Germany and the Netherlands who had settled in Indiana in the 1800s.
How crazy is that?!
I'm a born and bred German citizen, and immigrated to the US in 2003 (I like telling people I'm a mail-order bride but that's not quite how I met the husband). Little Man was born on German soil, but thanks to the good relationship between the US and Germany, he holds dual citizenship (and has two passports). After 100 years the Little Old House is again home to people with German roots!
Crazy, isn't it?
I mean, what are the odds? 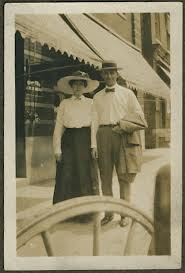 [This is not an actual picture of the Stukenbergs - I wish I had one!]

Henry Stukenburg was born on June 15, 1868, in Aurora, Indiana, to Herman and Margaret Stukenburg (also spelled Studenburg, Stukenburg or Stuckenbirg). He was the second-oldest of six children and had two sisters (Mary and Lena) and three brothers (Fred, Frank and Edward). His father made a living as a cooper and his mother was a homemaker.
His future wife Emma was born  in either 1869 or 1870 as the second-oldest of five children to Fredrick and Katherine "Katie" Wesler in Lawrenceburg, Indiana. She had three sisters (Maggie, Minnie and Carrie) and one brother (Harry). Her father was a local coal dealer.

Henry and Emma tied the knot on November 17, 1890 in Lawrenceburg/Dearborne, Indiana, and sometime between 1910 and 1920 moved to Jacksonville, Florida, where Henry worked as a foreman for Wright, Barrel & Coal Company.

Their union remained childless, and Henry passed away on October 26, 1929, in Jacksonville, Florida. He was buried on October 30, 1929,  at St. Mary's Cemetery. Mrs. Emma must have loved him very much because she followed him only a short time later, passing away on June 19, 1930. She is also buried at St. Mary's. I still need to go and look up their grave site and bring them some flowers.

And in case you are related to our Stukenburg family - please don't hesitate to contact us! I'd love to learn more about the first family at our Little Old House!

All this information I gleaned from census documents and other records through Ancestry.com and Familysearch.org. I really enjoyed Familysearch.org and had the best results through their site. As an added bonus it's free to use but you might run into finding documents that require a paid account through Ancestry.com. I tried their 14 day free trial but can't really get the hang of their interface well enough to make a full account worth my while - for now.

Maybe when I have more time on my hands .... yeaaaah, right. Like that will ever happen!