Here's a quicky for you to tide you over until my brain has recovered from too little sleep and too much excitement (more on that later) and functions well enough to write a bigger post. That also requires getting my rear end into gear and -do- something more worthy of a post than emptying out half a dozen moving boxes (in the frantic search for a missing library book - joy!).

This is what our ceiling light in the master bedroom looked like until a couple of days ago. 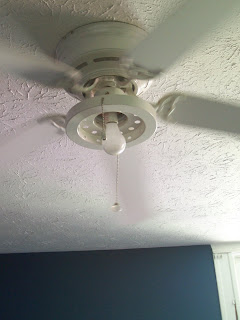 Bare bulb - Niiiiice!
Somehow a handful of the Duckling's ceiling lights ended up with their covers missing. Why? Your guess is as good as mine and I keep drawing a blank. Anyways, this is Florida and the fan feature wins over light feature.
Hands down.
10 months of the year.

Oh, the light did work. It just looked ....well, unfinished and needed -something-. Blue Box store to the rescue. The blue box store has a rather surprising and stylish lighting aisles and a great selection of lamp shades. 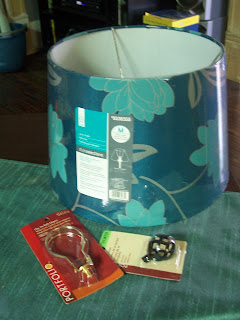 That's where I found this baby here in teal and turquoise and silver for a whopping $14.99 Not kidding, it was really that inexpensive. I picked up a bulb clamp and a finial which in the end I didn't use. Three pieces of wire and 30 minutes later, the view had improved by leaps and bounds 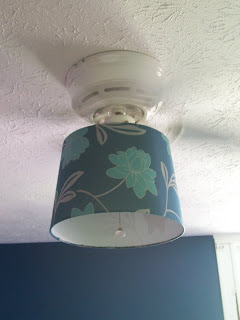 Much better :o) My only regret? The design doesn't have a bit of yellow in it. Maybe I'll fix that with a little bit of acrylic paint at some point but for now I'm really liking the new look while still able to enjoy an indoor breeze without having to let the mosquitoes in or the dry cool air out.
Posted by Micha @ A little old house at 8:19 AM