Window to the world

Another day, another piece of trim. That's the life at the Darling Duckling. And while it is still one of the most rewarding projects (nothing beats the look of freshly painted crisp white trim), it continues to be the one I consider the most boring. It's three coats of white, for heaven's sake! Not to mention the tedious but oh so necessary prep work.

Oh well, I'm plodding along, tackling a bit of trim as often as I can muster the enthusiasm and don't get sidetracked by - Oh shiny! - more fun and exciting projects on the side.

A few days ago - before a "oh shiny" project won me over - I decided to - sigh - continue work on the library. This notion stems from the "finish a room" notion I described earlier this month. My original plan was to finish one room and then move on to the next. When I finished the halfbath downstairs, moving on to the library sounded like the next logical step (until we discovered we really were done living out of baskets and boxes and bumped up the priority for the dressing room a notch or two).

The library/study/man cave has a beautiful double window on the south west wall which makes this not overly large room bright and airy. After the old window unit on the left "walked away" during the break-in in December way before we closed on our house, it became apparent that the trim was in pretty rough shape. Deep gouges and rust stains showed where the old monster of an ac unit had sat, and the rest wasn't any prettier. 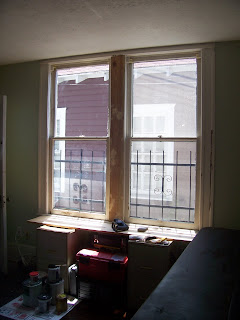 [Before: Pretty big window in all its dirty ram-shackled glory]
After removing 7 different sets of curtain and blind hardware (Wanna be a good tenant? Remove any frakkin' curtain and/or blind hard ware not in use ...sheeesh) and a good cleaning, I scraped loose paint like there's no tomorrow. 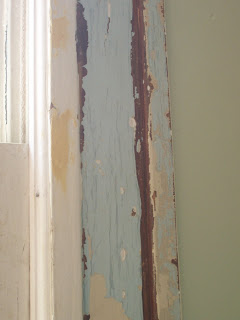 [Paint scraping in progress]
While so far every scraping has revealed layers of neutral off-white paint over the original varnished dark wood, this window held quite a surprise when the scraping revealed a beautiful shade of aqua. What a great color! 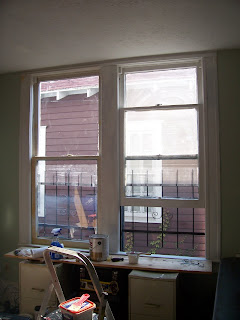 [Ready for some paint!]
The deep gouges required several fillings with wood filler followed by a gentle sanding and the finally priming. Several hours later the double window was finally ready for paint and I ...? Well, I was pretty pooped and didn't feel like painting another 2 coats of white before dinner. So I called it a day.

I did, however, hang the curtains because I wanted to see what the end result would look like. Yep, hung them over an only-primed window. Yep, will have to take them down before finishing up the window but by golly, I needed that little sneak peek as a pick-me-up. 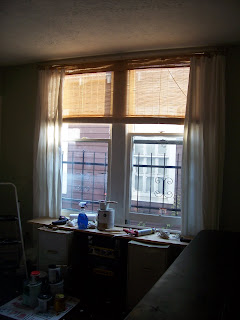 [Almost after: matchsticks roll-up shades for privacy and two simple white curtains on either side for softness]
Yes, that's our neigbor's house you can see through the window. Yes, we're pretty close. Well, our houses are (we hardly know the neighbor on that side since they were gone for a couple of months, it appears). This is an urban neighborhood and often, houses are pretty close together. However, Springfield managed to walk this fine line between privacy and neighborhoodly closeness beautifully and we don't feel at all compromised in our privacy. Our neighbor keeps her blinds closed on that side at all times and now we can do the same if we want to or feel the need to (although we aren't ashamed to flaunt our wealth of books) 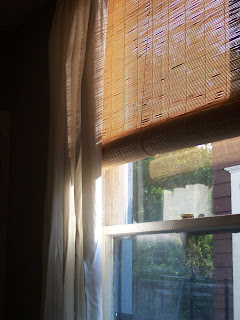