On one of our trips to the blue ..or was it the orange? ...box we discovered and fell in love with a simple organizing system we envisioned for our former porch turned enclosed shed.

You see, without an organizing tool you're headed face first for failure to keep a storage place tidy and fucnctional. no hook to hang this gadget? Ahh, we'll put it here in the corner ...for now. Need a spot for this gizmo ...ahh, over here on the floor seems to be a good place ...for now. And at some point you notice that "for now" has turned into "forever" and that you can't set a foot into the space anymore because gizmo and gadget and their extended family have taken over the space. Or blocked the door. From the inside. Or both.

Anyways, for just $12 we decided to toss it into the cart and take it home 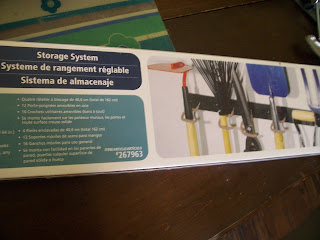 [Inexpensive and easy to install storage system]
So one early afternoon, left to my own devices what with husband being at work and the little man still at summer camp, I decided that a quick project was in order. Something that doesn't involve white semi-gloss paint. The instructions declare that installing this system takes about 30 minutes so it very much fit the bill.

Armed with pencil, level, drill, screwdriver and the box I unlocked the shed and set to work.
First order of business: locating the studs! That was easy peasy (not like in the library) because in the shed, they're all nicely exposed (and right now this statement has me wondering if blogger will censor this post ...) 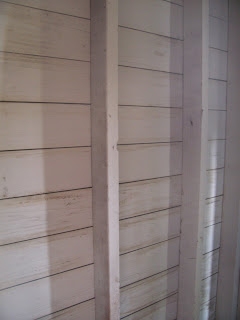 [Before: Bare wall and easy to locate studs]

I decided to split the system up into two medium lengths consisting of 2 pieces each, rather than using the full length because one end would have ended up behind the furnace in a hard to reach corner.

I leveled the pieces, then marked the drill holes. Drilling was fun since the studs are rock hard pine but in the end I succeeded creating 4 sweet-smelling drill holes. 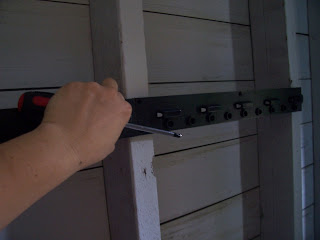 [In-progress: Ready for screws]
After screwing the pieces into place and adding end caps for a more finished look, I decided to just use the big cushioned S-hooks on the organizer on the big wall and a combination of S-Hooks and short nubby pins on the wall that has the cabinet. That way I can hang the larger gardening tools like hoe and rake and shovel out of the way on one side of the shed, and the smaller ones like snips and shears on the wall with the cabinet. 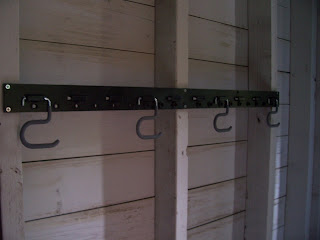 It really was a 30 minute project, and one that left me feeling very satisfied. The gardening tools are no longer underfoot and getting in and out of the shed is no longer an acrobatic feat! 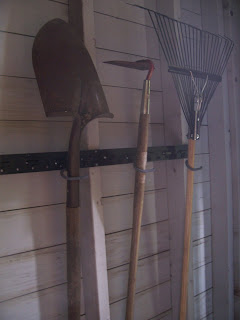 [The garden gang - back against the wall, lined up and ready for duty]


Oh, by the way, even without each piece being screwed into the wall at mid-point on top of being screwed into the studs (there's no inside wall, obviously, just the siding from the outside) this system is plenty stable and even bears the weight of the weedwhacker easily. Thought I'd mention that.
Posted by Micha @ A little old house at 8:16 AM