The fireplace that will be

A big imposing fireplace was definitely not the selling point of our Ugly Duckling. Sure, it does have a fireplace, sort of. At some point in its history, the owners decided that a fireplace wasn't a must-have, ripped out the cast-iron insert and bricked the entire thing up.

While we didn't want to add a gas fireplace or try and find out what it would take to restore the existing set-up into a wood-burning fireplace (Remember my worries about wooden houses and fire/gas inside?), we still thought it needed -something-. Something that would turn it from a humongous brick wall in our livingroom into a design feature or sensible focal point (since it's already drawing a whole lot of attention to it through its sheer size)

Our first test to see how adaptable it was, was painting the brick matte white (you can read about that here). It had already been painted over with a satin brick red paint so we didn't feel bad about painting the old brick (removing paint from brick is a real bear and usually damages the brick). The matte white did do wonders for its overall appearance. It turned into quite a looker!

[After: Hello pretty!]
I'm sure you noticed the square in the center that we spared. It is right where the firebox would have been had it not been bricked over. You could actually very easily tell old brick from new brick: the new bricks had a crisp sharp edge and a less porous surface than the older, original brick.

Like Carter excavating Tutankhamen, we managed to wheedle the first brick out of its spot after several hours worth of chiseling, drilling, hammering and hacking. 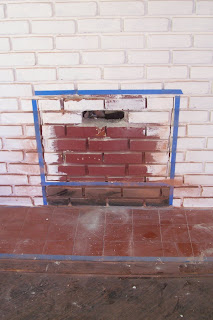 Frankly, this is something we should have done the day after closing. It's a godawful mess (Yes, our contractors warned us) and 'stinking filthy' doesn't adequately describe your looks after handling a brick or two. 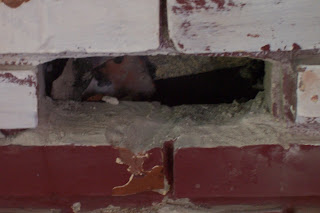 Unfortunately, we can't continue to quote Carter. We didn't get to see "some marvellous objects here" but more bricks and bricks all covered in a layer of thick fatty soot. Joy! 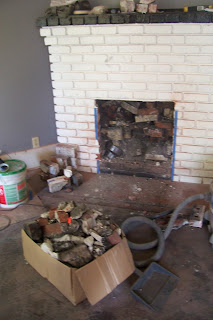 Husband continued to hack, chisel, chop, drill and sledgehammer away. Both he and the Little Man looked like they'd been working in the coal mines all day after they were done.

We cut a piece of plywood to size and scribbled a quick note on it, both for us and for possible future owners, and after signing it wedged it into place to keep drafts out. 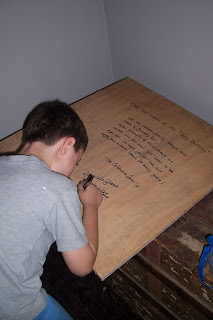 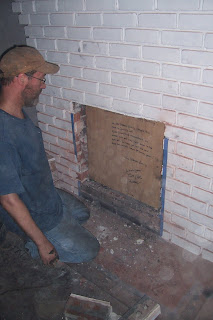 We'll seal it with some foam and then add the last ingredient to a successful super-inexpensive fireplace make-over.
Posted by Micha @ A little old house at 7:12 AM