Me and my stripper

Guess what?
The stair case is still not completely painted.
The culprit?
A mostly unmarred layer of black paint underneath about 4 layers of white and off-white paint (and on top of 2 layers of more off-white paint which seems to date to the very early days of the Duckling since the wood underneath that is not varnished like the window trim in the bedrooms, for example). Other than in spots with old termite damage this stuff is a solid even layer and no primer I've tried successfully elsewhere in the house will stick, not even after rubbing it down with deglosser.
It has me stumped, it has.
So, I finally broke down and brought out the big guns: a stripper! And not just any stripper but the brightest and best smelling there is! 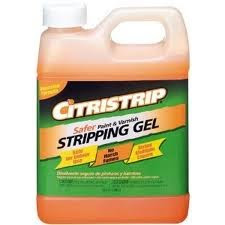 Yep, we entered the stage of chemical war fare. I'd heard and read good things about citristrip and wanted to give it a shot before breaking out hammer and chisel in an attempt to get past the layer of black doom. yes, I know, we do have plans repainting the staircase in black but we sort of expect the new coat to stick and not peel off after a week or two. Armed with gloves (I skipped the goggles, I'm a dare devil like that) I poured me a cup of citristrip and slathered it on. My, it does smell nice. Not so nice too close up which lets you catch a whiff of chemical sharpness but quite pleasant when you're keeping what is usually considered a good reading distance. 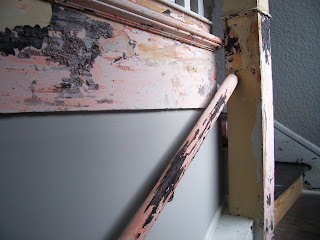 Here's the staircase's cantilever balcony in all its cow-print glory: remaining patches of white paint mingle with exposed layers of the black underlayer and bare wood. Not cool. The orange-y tint of the gel goes on easily and gives everything a pinkish tinge. At least it smells nice ... 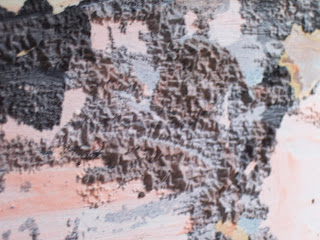 This is what happens a few minutes after applying the gel. Like skin after a mad sunburn, the layers of paint bubble up and separate from each other. It looks pretty cool! 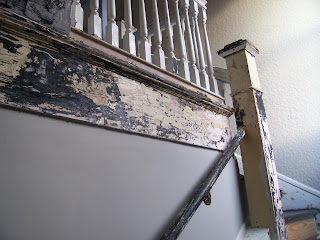 Armed with a scraper I scraped off the loose paint. The more recent white paint came off right away, the layer of black paint is fighting tooth and nail still but it's a losing battle, thank God.

The underlaying layer of off-white vintage paint (milk paint, perhaps?) its still going strong which means I'll have to either try a second application of Citristrip or clean it up as much as I can, degloss it and call it a day. I know the primer will stick to that, fortunately. 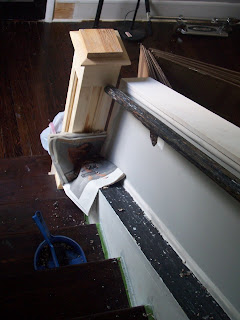 Stripped handrail waiting for a final clean up, a sanding and a new coat of paint.

Sooo ... been stripping anything fun lately?